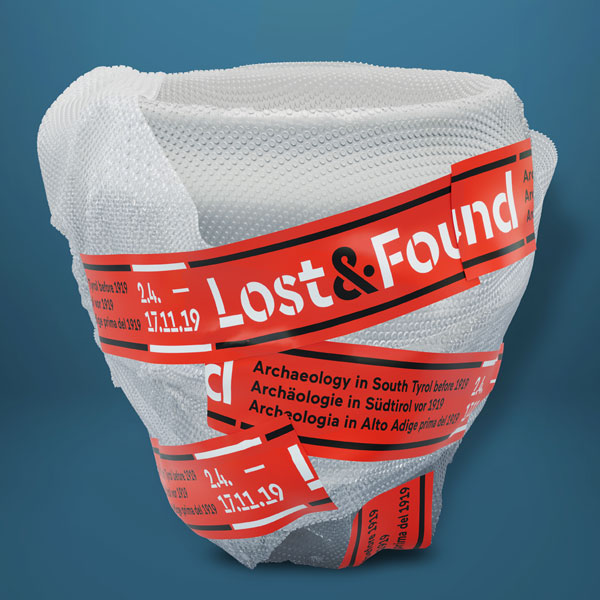 Archaeology in South Tyrol before 1919

For the Special Exhibition, the South Tyrol Museum of Archaeology has tracked down from all over the world some very special items which were originally discovered before 1919, when today’s South Tyrol was still part of the Habsburg Austro-Hungarian Empire. These rediscovered finds from the Neolithic to the early Middle Ages are being shown together, for the first time, in South Tyrol.
LOST & FOUND

Design exhibition at the South Tyrol Museum of Archaeology

100 gifts from 100 designers and friends of Achille Castiglioni and a small selection of objects from the Achille Castiglioni collection, paired with some correlated industrial items – the source of inspiration – have been on display at the South Tyrol Archaeological Museum. 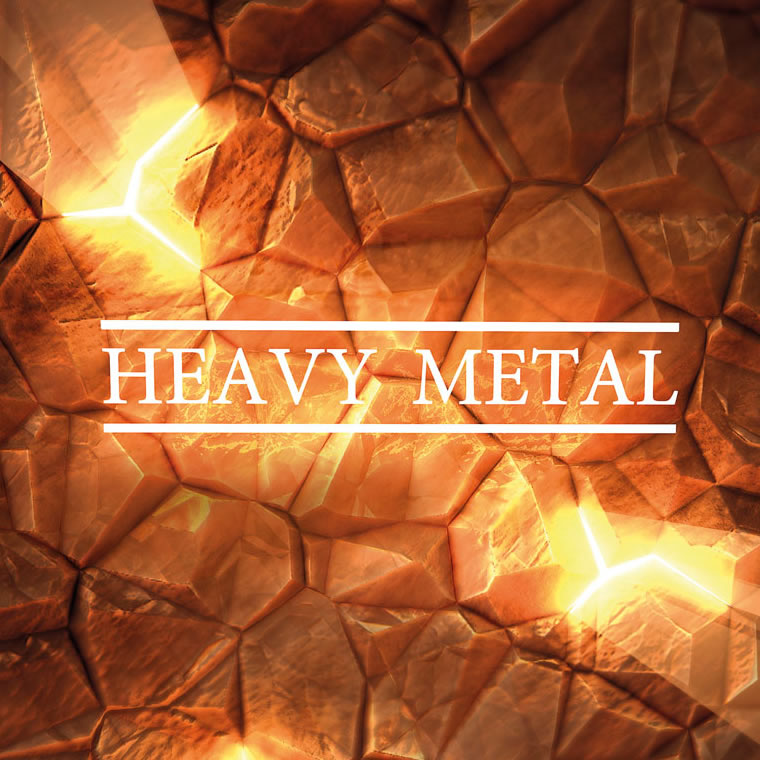 How copper changed the world

The special exhibition HEAVY METAL traced the history of copper. What were the consequences of its discovery for Stone Age man? And why is the shiny red metal found in smartphones, coins and electrical cables today?
HEAVY METAL 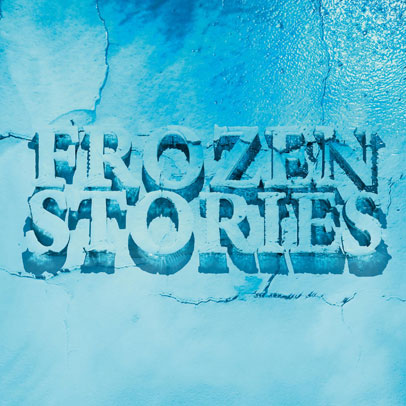 Discoveries in the Alpine glaciers

Climate change also has its archaeological aspect. It can bring to light what has been hidden under glacial ice for a very long time. Ötzi was not the only lucky find of the last decades. Many other objects have been exposed from the ice, recounting exciting stories from a distant past. And every new discovery gives rise to the question: What was it that drove people onto the glaciers for thousands of years?
FROZEN STORIES 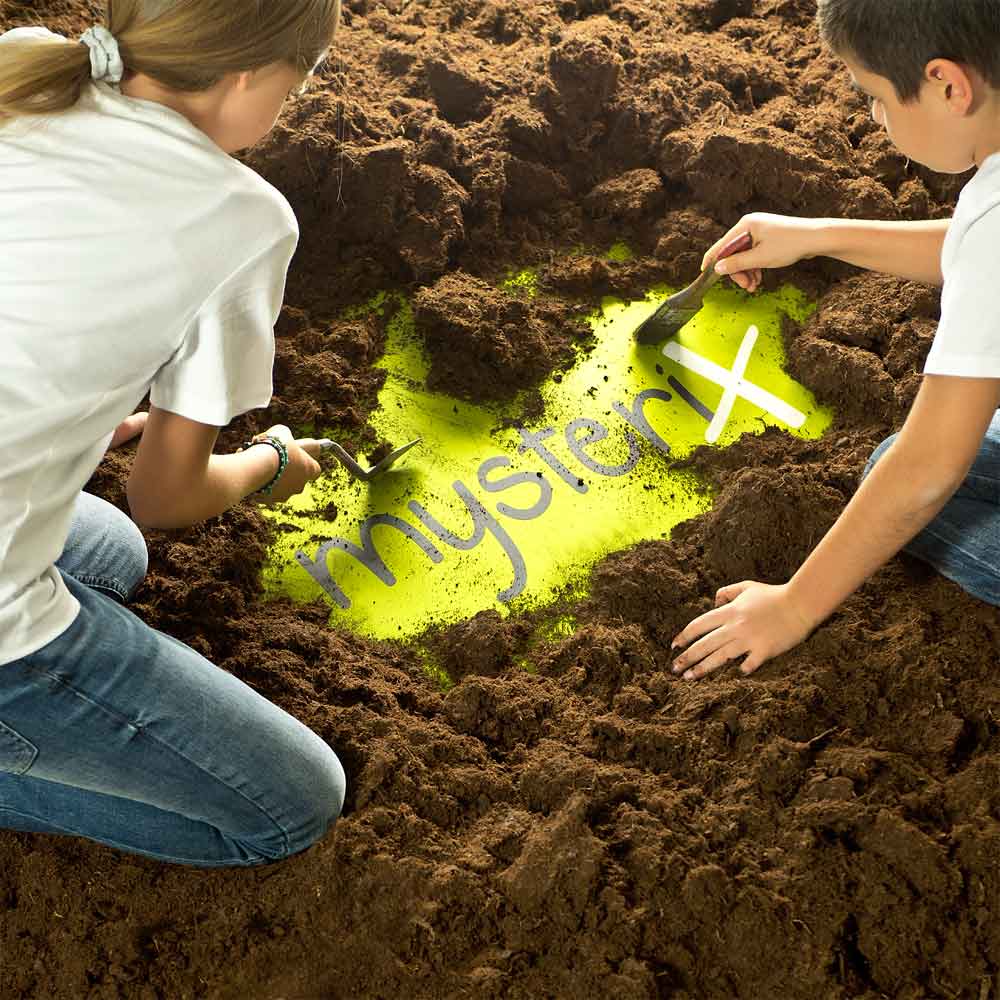 Unique archaeological finds from the Bronze Age, the Iron Age and Roman times are mystifying researchers and scientists: What were the objects used for and what is their significance? Come on in, kids! Pretend to be the researchers. Rack your brains, discover and deduce. Solve these mysteries for us!
mysteriX

Marking the 20th anniversary of his discovery, the South Tyrol Museum of Archaeology in Bozen has dedicated a Special Exhibition to Ötzi, the Iceman. The Museum has also presented the new reconstruction of Ötzi at the opening of the exhibition.
ÖTZI20 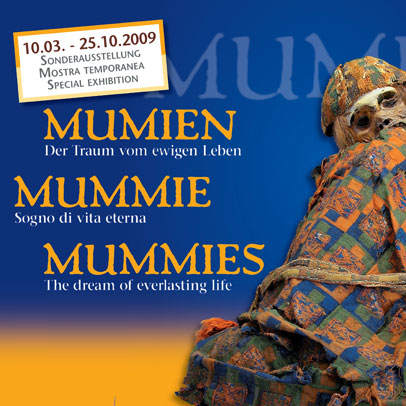 The dream of everlasting life

Displaying over 60 mummies, numerous accompanying findings and precious burial offerings, this exhibition provided fascinating insight into mummification, a phenomenon encompassing different periods in time and places in the world. The exhibition took the visitors to different natural environments and cultures that unwind from the dinosaurs to Ötzi and Ancient Egypt to the modern day. The exhibition entitled "MUMMIES - The dream of everlasting life" was conceived by the Reiss-Engelhorn-Museums in Mannheim; its original content has been re-adapted for the show in the South Tyrol Museum of Archaeology. In his quality of one of the most important mummies worldwide, Ötzi was at the core of this special exhibition. 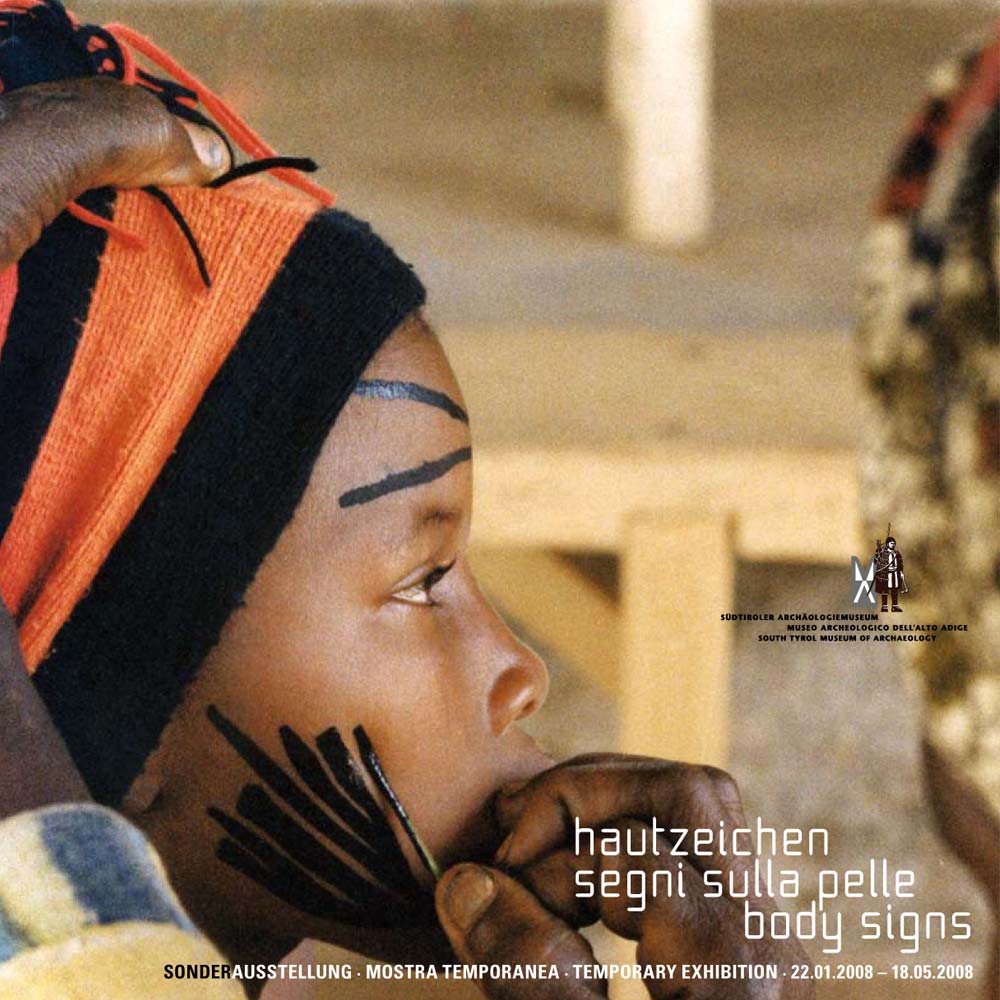 Beginning with the more than 60 tattoos found on the Iceman’s body, the exhibition displayed examples of tattoos, scarification’s and body dyeing within the different prehistoric and ancient cultures, examining their function, symbolic meaning and social context, without losing sight of our modern day society. Some ethnographic examples amplified and completed the panorama of the phenomenon of body modifications. All over the world, people communicate through their skin. Body modifications, above all in non-European societies, represent a fundamental element within rituals that mark the different phases of the life of man. Body ornamentation characterizes the identity of a person, distinguishing them from others and revealing their membership to a family group, social rank, ethnic group or a religious community. Cases taken from National Socialism, but also from ancient Greece and Rome, demonstrate that people were stigmatized and marked by means of tattoos. A large number of examples from New Zealand, New Guinea, India, Guinea, Congo, central Brazil, Alaska and Europe highlight the different aspects of the phenomenon and point out the richness and complexity of the world conceptions of different cultures. 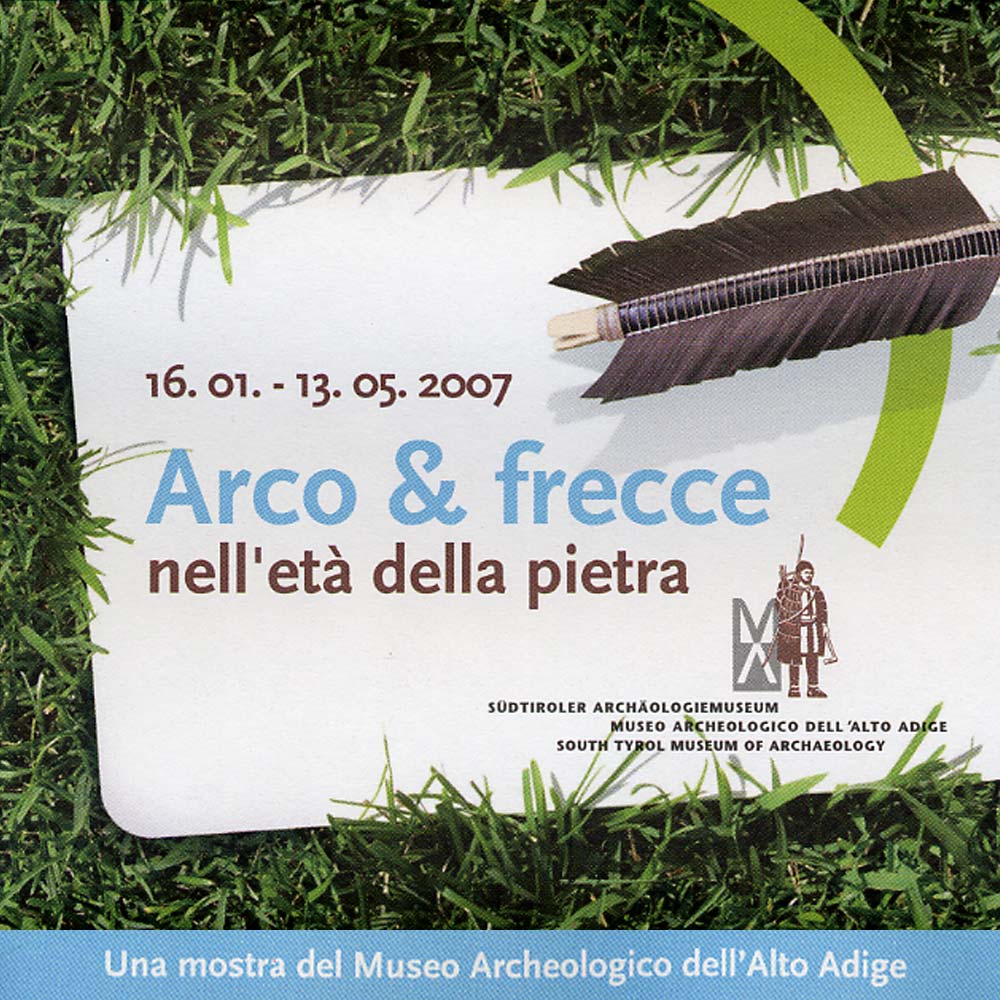 The bow and arrow in the Stone Age

From the Stone Age to today

We have drawn an arc from the Stone Age to today. This was an exhibition for the whole family. For thousands of years the bow and arrow was an essential hunting tool and combat weapon of our ancestors. It allowed people to feed themselves and fend off enemies. The exhibition showed the material and tools used to fashion bows and arrows in the Stone Age and how efficient and accurate they were. In the program of events accompanying the exhibition, there was an opportunity for visitors to watch technical archaeologists, to construct bows and arrows themselves and to put their own archery skills to the test. 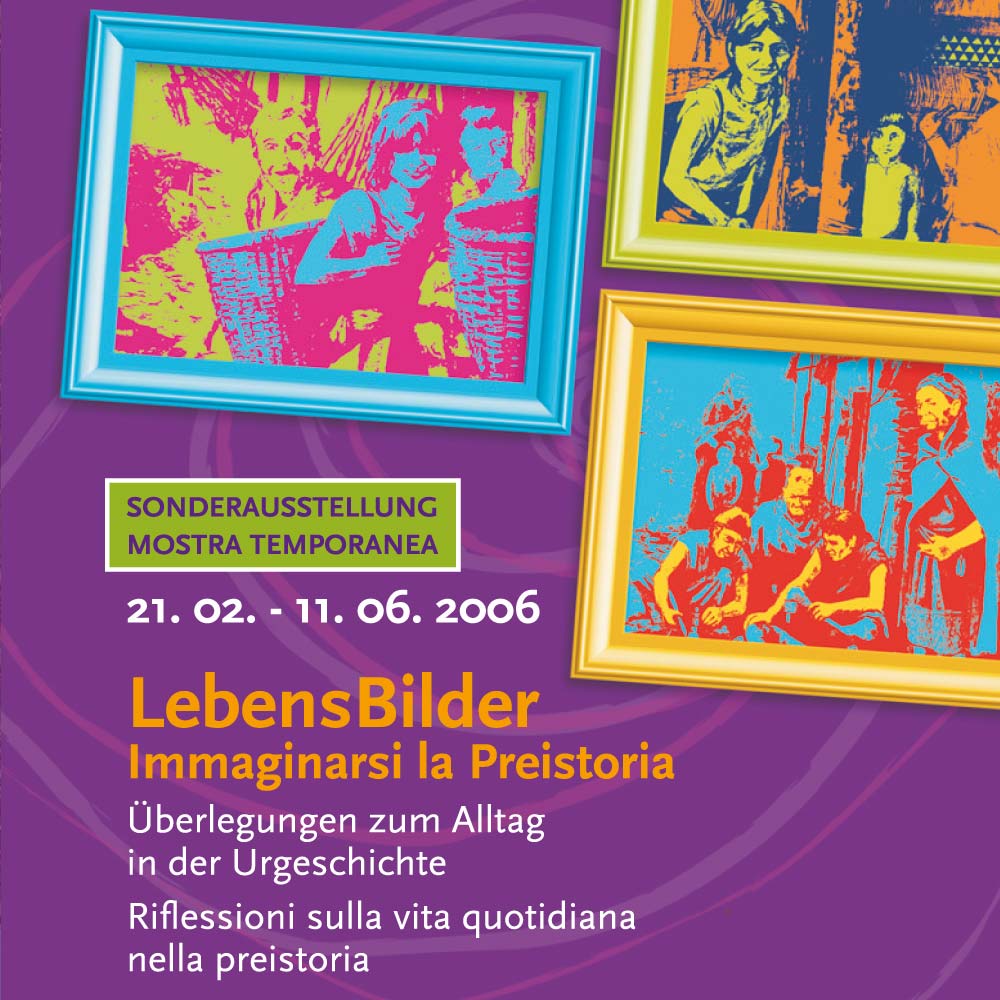 Archaeologic stereotypes and reconstructions depict an idyllic picture of life in prehistoric times. But they are only part of the truth. Moreover, they reflect our view of a world in which it is believed that traditional values of society applied. The exhibition questions the messages from archaeological stereotypes that influence the current debate about relationships between genders and generations. 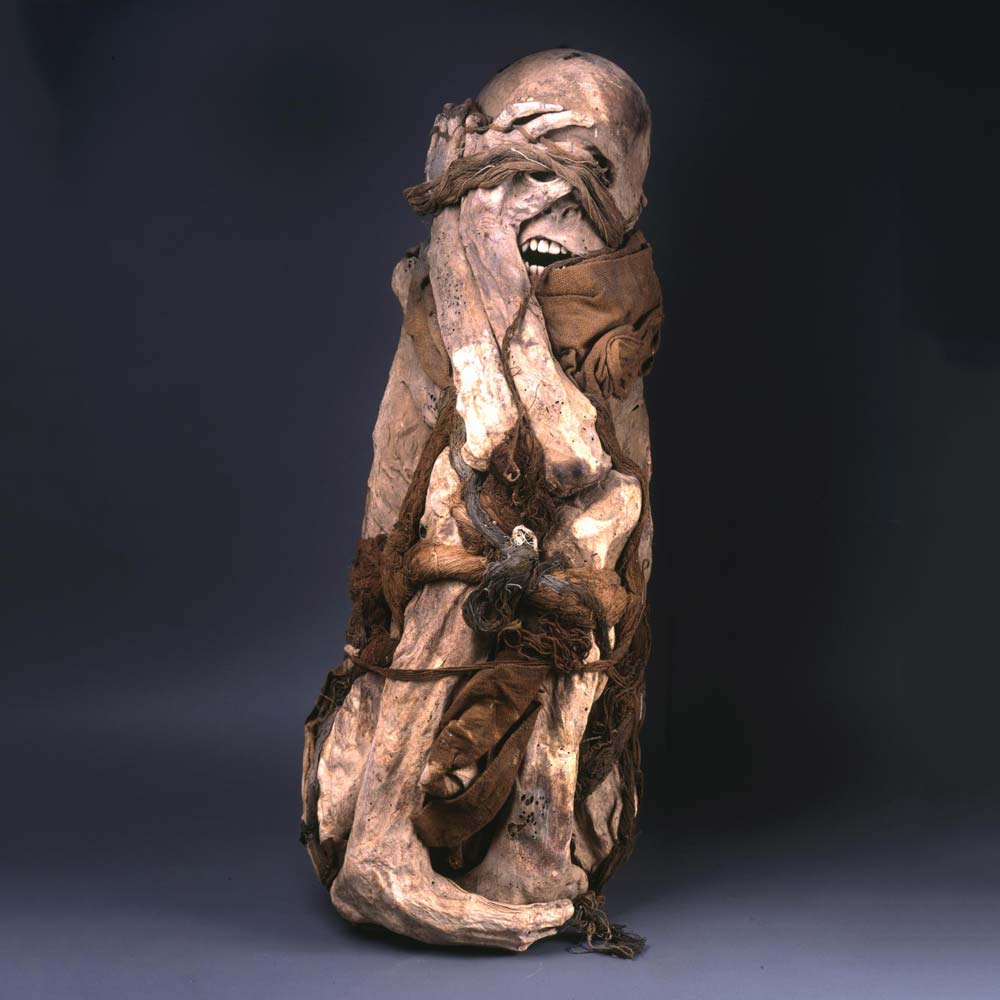 The secret of the cloud people

The Chachapoyas in the Peruvian cloud forests

From 800 AD, the Chachapoyas, who have yet to be fully researched, populated the densely forested mountain spurs of the Peruvian Andes. The Chachapoyas were conquered by the Incas in the 15th century, shortly before the arrival of the Spanish. They were wiped out in the 16th century by infectious diseases introduced from Europe. The cloud people buried their dead in two-and-a-half-metre-high stone caves. It is unclear whether the dead were embalmed and their internal organs removed like Egyptian mummies. Twelve human mummies were on display as well as over 100 everyday and decorative textiles, pottery, wooden objects and metal implements. The cloud people’s environment has been reconstructed as far as possible using models and maps. 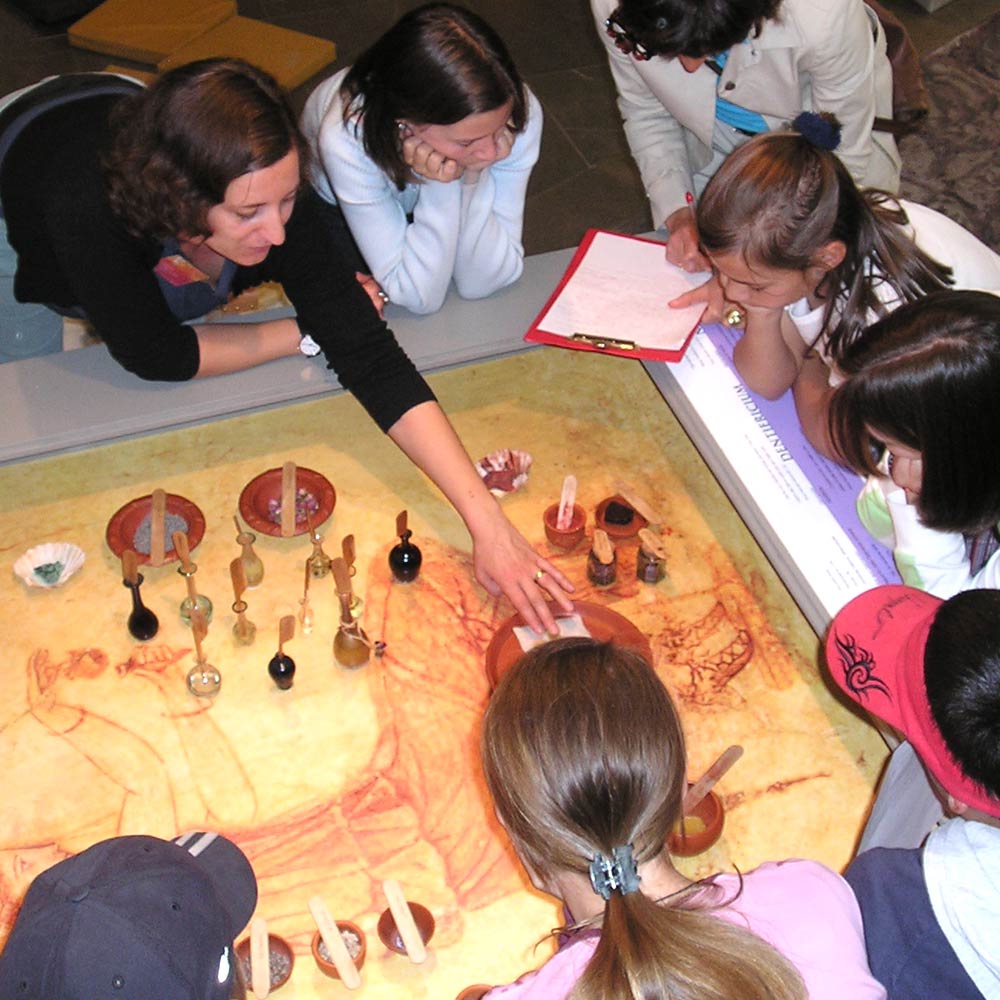 Radiant from head to toe

Beauty and bodycare in Roman times

How did the Romans look after their appearance? How did they adorn themselves? Did they clean their teeth? What evidence in South Tyrol can tell us about the Roman’s personal hygiene? These and other questions have been addressed in a thematic excursion in the Roman Department of the South Tyrol Museum of Archaeology. New discoveries and original artefacts never before displayed as well as illustrations and hands-on replicas from South Tyrol formed the focus of the presentation, which portrays many aspects of Roman life for children and adults alike. 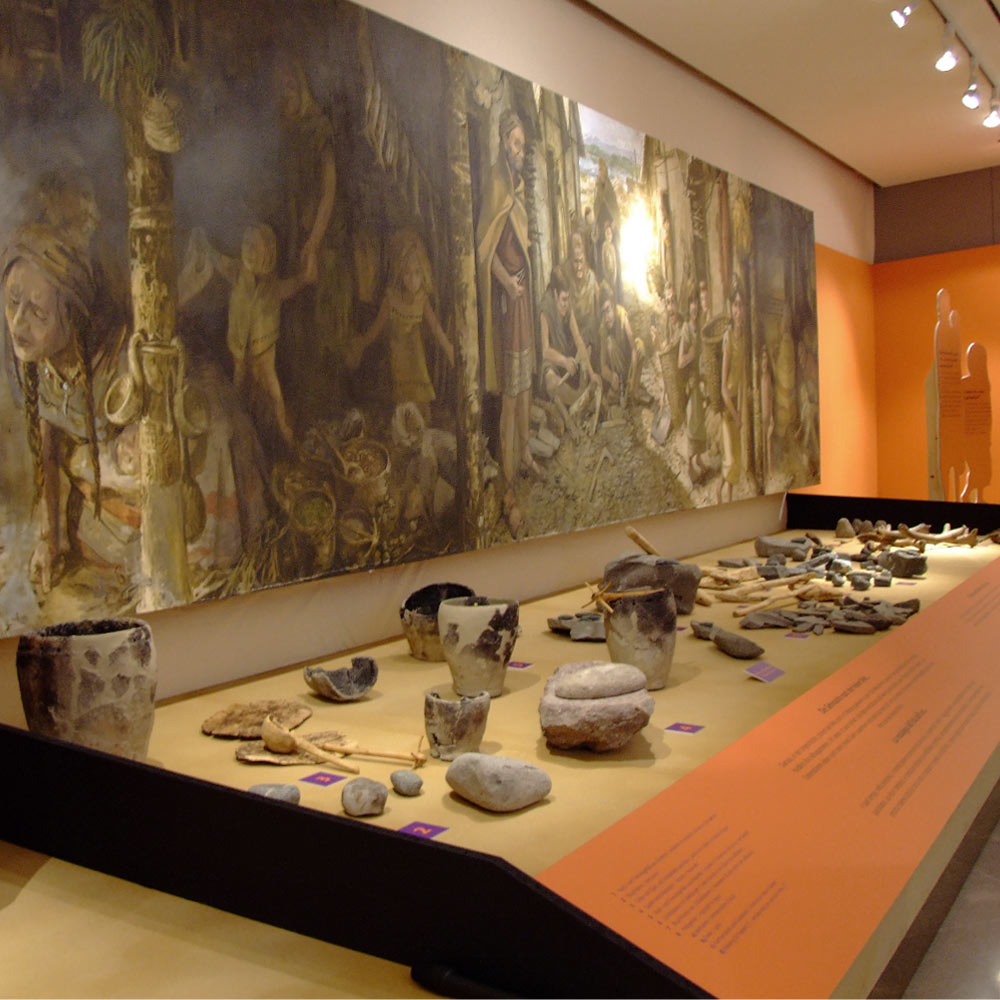 The evolution of man

The exhibition, tailor-made for children, traced the evolution of man, which, according to the latest research, began seven million years ago. The exhibition displayed the living environment and stone tools of our ancestors from Australopithecus to Homo sapiens sapiens. This was a special exhibition by the South Tyrol Museum of Archaeology in cooperation with the Natural History Museum in Verona. 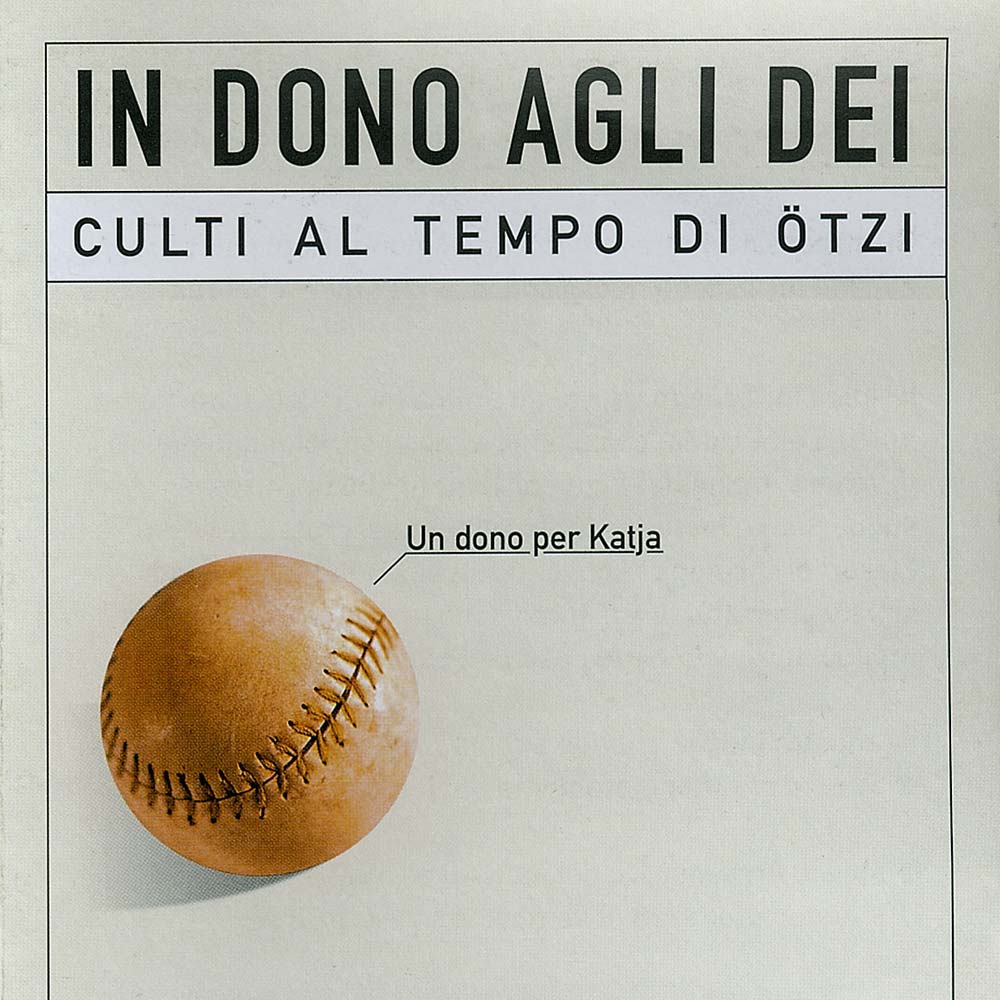 In the name of the Gods

The discovery of a new archaeological site from the copper age on the Pigloner Kopf, on the Monte di Mezzo in 1995 attracted the attention of the archaeological research. Looking at the vertiginous rocky cliffs, the fallen boulders and the deep crevices, a thought springs to mind: What particular significance had this place? It’s hidden treasures leads us into the spiritual world of the copper age in the Alps.