Ötzi is a wet mummy that was mummified naturally in the glacier ice. Due to the length of time it lay in the snow and ice, the body dehydrated, i.e. much of the body fluid was lost. Most mummies were treated with substances to preserve them as part of ritual burial after their organs had been removed. Ötzi is unique in that he has been preserved almost in his entirety.

Following reports of the find by the international media, various names were coined for the mummy. Over 500 nicknames were mooted in the first few weeks. The Viennese journalist Karl Wendl dubbed him Ötzi, after the discovery site in the Ötztal Valley Alps, and this has become his most popular name today.

The mummy in the Museum

Since 1998, the mummy has been housed in a specially devised cold cell in the South Tyrol Museum of Archaeology in Bolzano. The cold cell simulates glacier conditions. The mummy weighs approximately 13 kg and is 1.54 m long. It lies on precision scales at -6°C and 99% humidity and is visible to the public through a small window. The mummy is regularly sprayed with sterile water to prevent loss of its natural moisture. 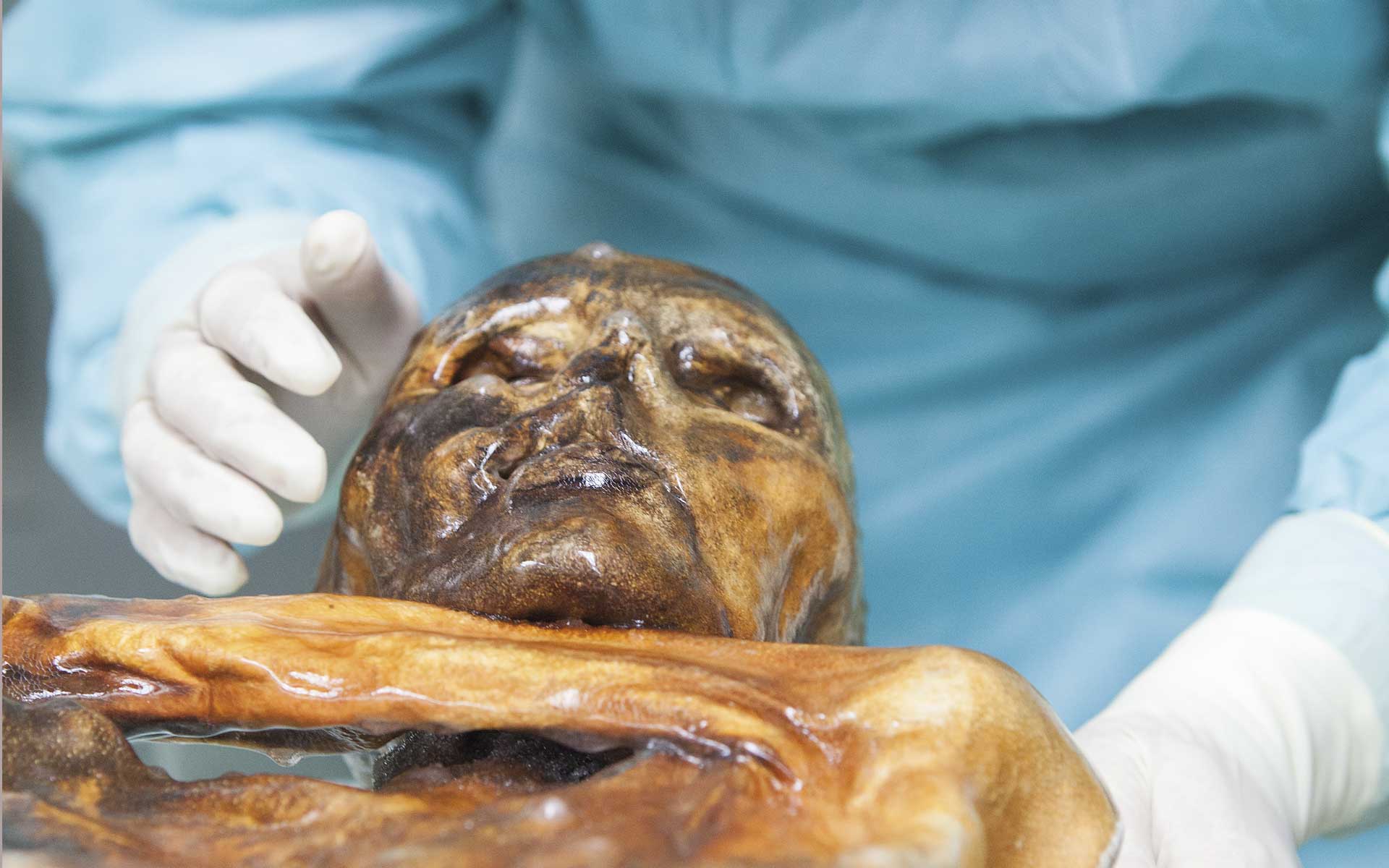 Since Ötzi is a wet mummy and his tissue, bones and organs are well preserved, numerous examinations have been carried out on him to learn more about his state of health when he was alive.

Age: Examination of the osteons (functional units of bone) in Ötzi’s femur (thigh bone) put his likely age to be around 45. This was a good age considering the short life expectancy 5300 years ago.

Height: The mummy is 1.54 m in length. In life, Ötzi must have been about 1.60 m tall. His shoe size would have been today’s equivalent of a continental 38 – the average for the population at the time.

Weight: The mummy weighs approx. 13 kg. In life, he would have weighed about 50 kg. Since there is very little subcutaneous fat on the body, he must have cut quite a wiry, sporty figure.

Hair: he epidermis (outer layer of the human skin) is quickly shed in the course of decomposition, and body hair is lost. A few clumps of hair were found around the body, indicating that Ötzi had dark, medium-long hair which he wore loose. Traces of arsenic were found in his hair, leading to the conclusion that Ötzi was sometimes present where metal ores were being smelted.

Nails: Ötzi’s fingernails and toenails fell off as he decomposed. During excavations, one fingernail and two toenails were retrieved. Horizontal grooves, or Beau’s lines, were observed on the fingernail – an indication of great physical stress.

Parasites and pathogens: Two human fleas were found in Ötzi’s clothing. Scientists also found the oldest evidence of borreliosis, or Lyme Disease, an infectious disease transmitted by ticks, in Ötzi’s DNA. The eggs of whipworm, an irritating intestinal parasite, were found in his digestive tract. 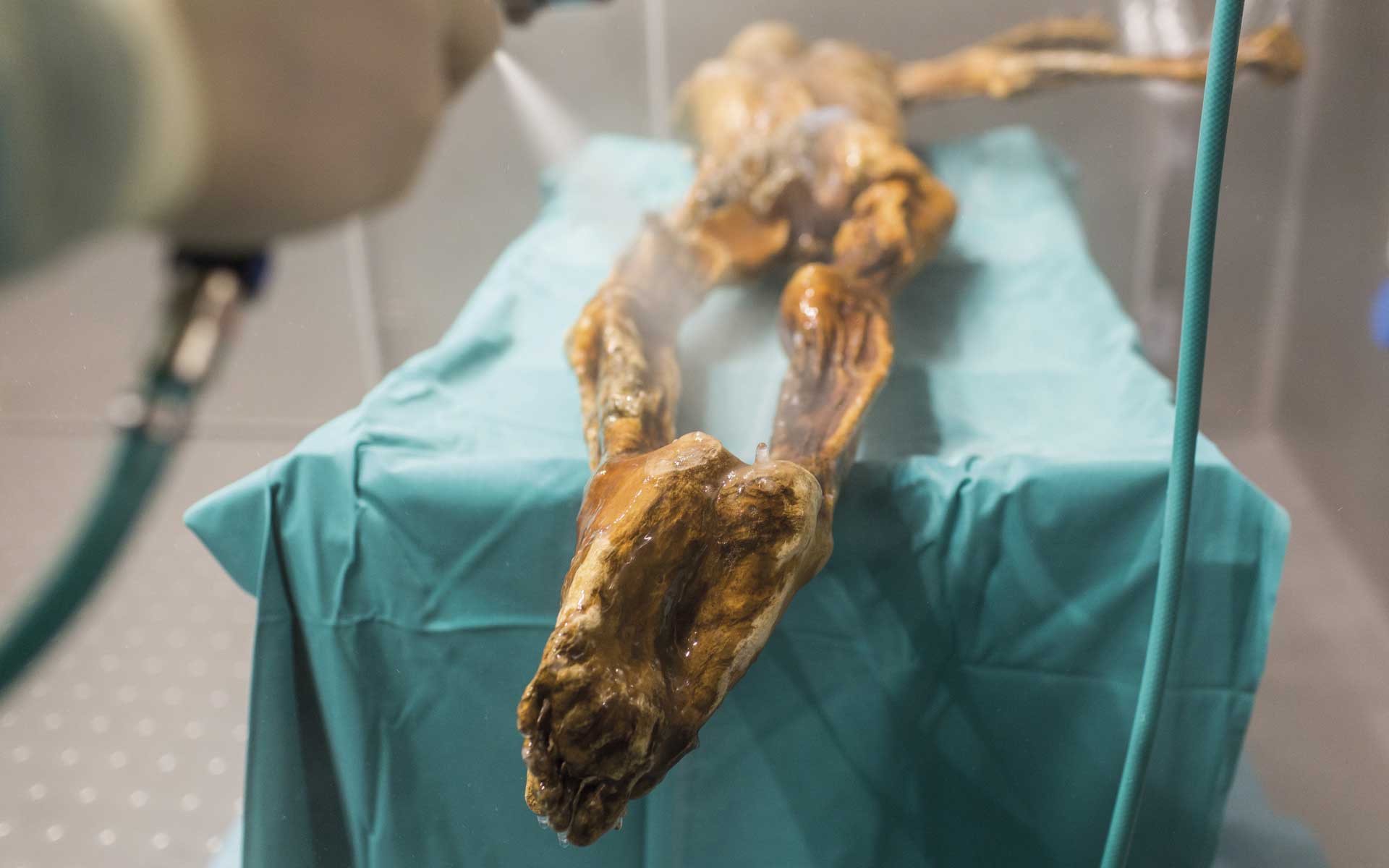 Ötzi is one of the best researched individuals in the world.

Numerous examinations have revealed information about his state of health.

Teeth: Ötzi’s teeth were badly worn, and there is a distinct diastema (gap) between his upper incisors, which is often inherited. The minerals in his teeth shed light on the composition of his drinking water and thus of where he lived as a child. Ötzi had no wisdom teeth.

Bones and joints: X-rays disclosed significant wear and tear of joints, including the hips, shoulders, knees and spine. His twelfth pair of ribs were missing – a rare genetic anomaly. Ötzi broke several bones during his lifetime, including several ribs and his nose.

Internal organs: Endoscopic examinations have shown that Ötzi’s lungs were soot-blackened due his to constant proximity to open fires. The contents of his stomach were also examined, revealing that his diet consisted of various types of game, grain and plants.

DNA: Ötzi’s genome has been almost completely decoded. His haplogroup (genetic population group) is very rare in modern-day Europe and is found almost exclusively among inhabitants of the islands of Sardinia and Corsica who were isolated for long periods. Ötzi was genetically predisposed to cardiovascular disease, which manifested itself in the form of arteriosclerosis. He was probably lactose intolerant, and his blood group was 0 positive.

61 tattoos were found on Ötzi’s body, all in the form of lines or crosses. Unlike modern tattoos, they were not made with a needle; they were fine incisions into which pulverised charcoal was rubbed. The tattoos are located near his ribcage and lumbar spine, on his wrist, knee, calves and ankles.

Scientists are still puzzled about the significance of the tattoos. They were located in places that would have been covered by clothing most of the time, so they don’t seem to have been made for adornment. Today, it is assumed that the tattoos served therapeutic purposes. They are all located at sites on the body with considerable wear and tear that were probably painful. It is therefore believed that the tattoos were made in a bid to soothe pain. This theory is supported by the location of the tattoos on acupuncture lines that are still used today. 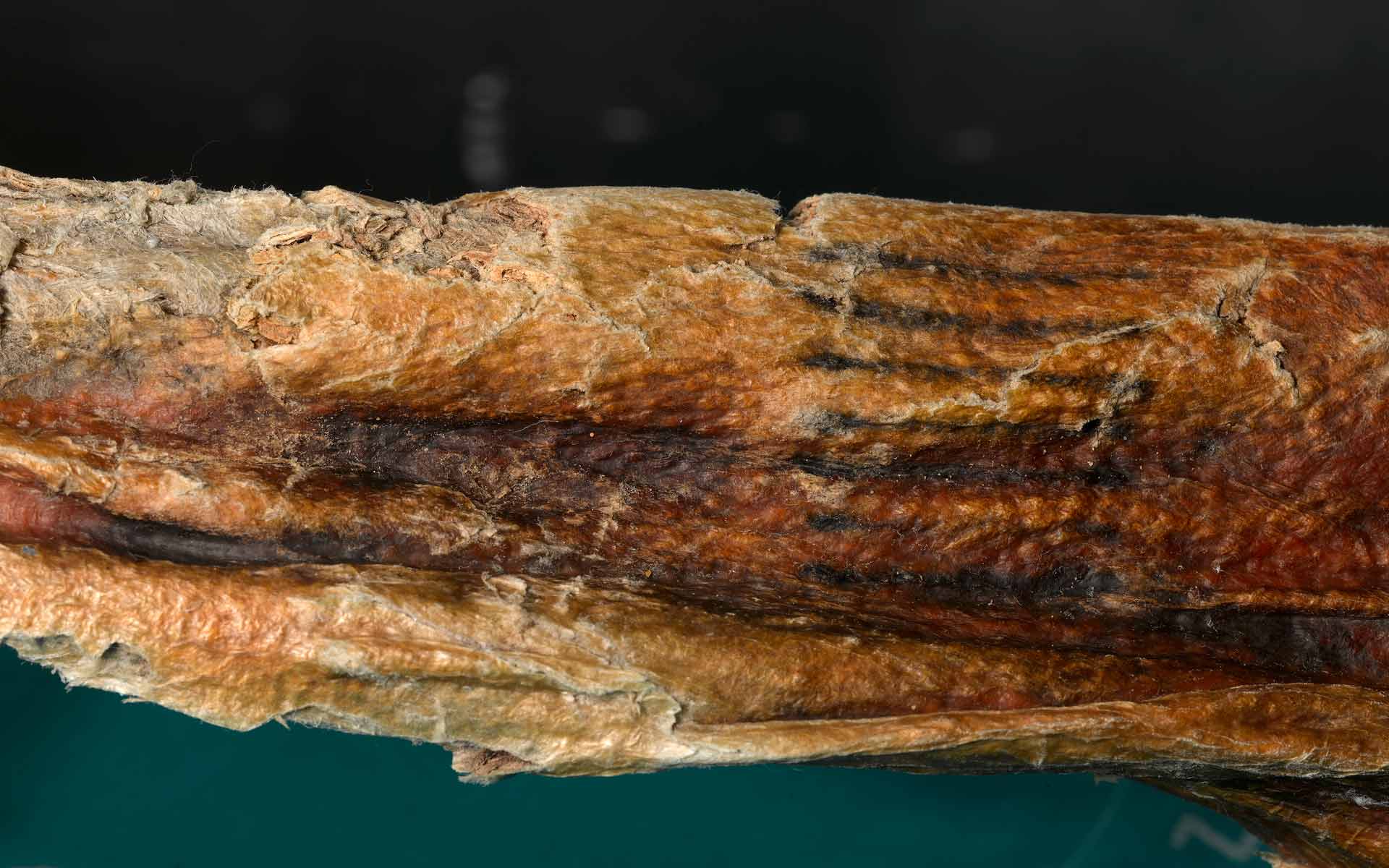 It is believed that the fine lines and crosses were made to sooth pain and were an early form of acupuncture.

At first it was thought that Ötzi had died in an accident in the mountains. It was only in 2001 that an X-ray revealed a flint arrowhead in his left shoulder, after which a 2 cm entry wound was discovered in his back. The arrow severed the subclavian artery, indicating that Ötzi bled to death within a matter of minutes. Ötzi also suffered a severe head injury – probably at the same time as the arrow wound. This could have been caused by a fall or a blow to the head. Perhaps Ötzi pulled out the arrow himself, or perhaps his murderer did. The arrowhead broke off when the arrow shaft was removed and is still in his body. The shape of the arrowhead corresponds to that of other flint arrowheads found in the area, including the ones Ötzi was carrying himself.

Murder on the glacier

There can be no doubt that Ötzi was murdered. A few days before his death, he was involved in hand-to-hand combat and had received a deep cut to his right hand. The evidence therefore suggests that Ötzi was being pursued and was confronted by one or more attackers. There are still many open questions, and some may never be solved. Why was he murdered and by whom? Was the motive revenge, jealousy, hierarchy, greed? Why didn’t Ötzi’s attacker take any of his equipment, even though the copper axe alone must have been of enormous value? Or was something stolen that we don’t know about? Why on earth did Ötzi flee to the glacier?

By analysing pollen and the maple leaves in Ötzi’s birch bark containers, botanists have narrowed the time of his death to early summer.

Ötzi: a murder case. Why did he have to die?

Mortally wounded by an arrow, Ötzi bled to death on the glacier. Who was behind his death and what was the killer’s motive?