Ötzi’s equipment is extensive and practical. He had a wide-ranging knowledge about how to survive in the wilderness. He was very well equipped.

Ötzi was well equipped to master the challenges of his alpine environment. He was adept at hunting with a bow and arrow, dismembering animals with his dagger, fashioning and repairing his equipment and making a fire.

He was very familiar with the qualities of the raw materials he had at his disposal. He knew which wood to use to make arrows and how to carve a bow. He sharpened flint tools with his retoucheur and mended his clothes with grass fibres. The copper axe could be used as a weapon as well as to fell trees.

The one thing that Ötzi didn’t carry with him was pottery. This would have been an important archaeological clue for assigning him to a specific cultural group. Pottery pieces are often very characteristic and large numbers of them have been found in graves and settlements. But of course it is understandable why Ötzi did not carry his provisions in heavy, breakable pottery jars. He carried them in a backpack or in his birch-bark containers. Ötzi’s equipment is globally unique in its diversity and its excellent state of preservation. It has provided us with fresh insights into life in the Copper Age. 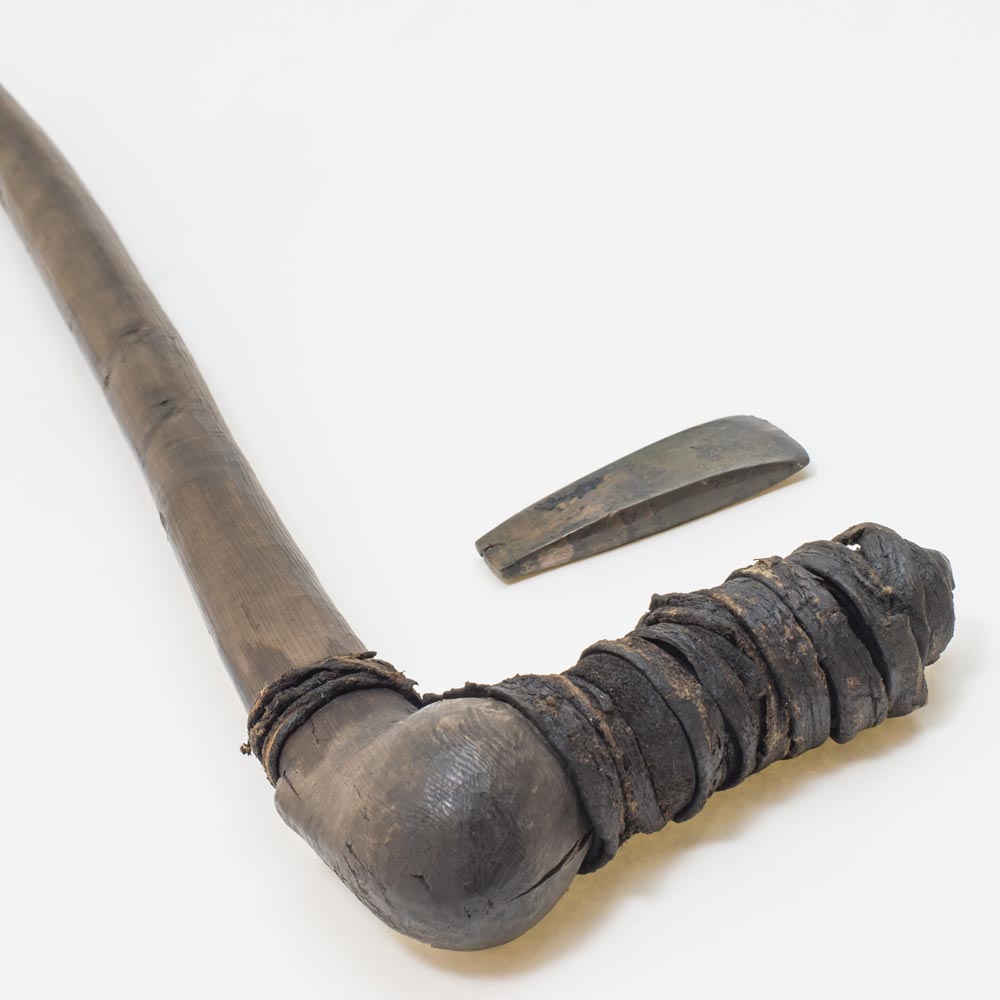 Ötzi’s axe was preserved intact and is the only one of its kind in the world. The blade consists of 99.7% pure copper and is trapezoidal in shape. The knee haft is made from yew and is approx. 60 cm long. The copper blade is fixed into the forked shaft of the haft with birch tar and is tightly bound with leather straps to hold it firmly in place. The blade was cast in a mould, cooled and then compressed by hammering. Signs of wear show that the axe had been frequently used and therefore had to be re-sharpened. The copper used in the blade does not derive from the Alpine region but from Central Italy. Researchers have discovered that the metal had been obtained from ore mined in South Tuscany.

Copper was the first metal to be used to make weapons and tools. Mining and smelting skills spread from Asia Minor to Central Europe 4000 years BC. Around 3000 BC, high-ranking men owned a copper axe, which was often buried with them. A copper axe was used not only for woodworking and felling trees but was also a powerful close-combat weapon. Was Ötzi a tribal leader? It remains a mystery why the attacker didn’t take this valuable copper axe. Would it have exposed him as a murderer? 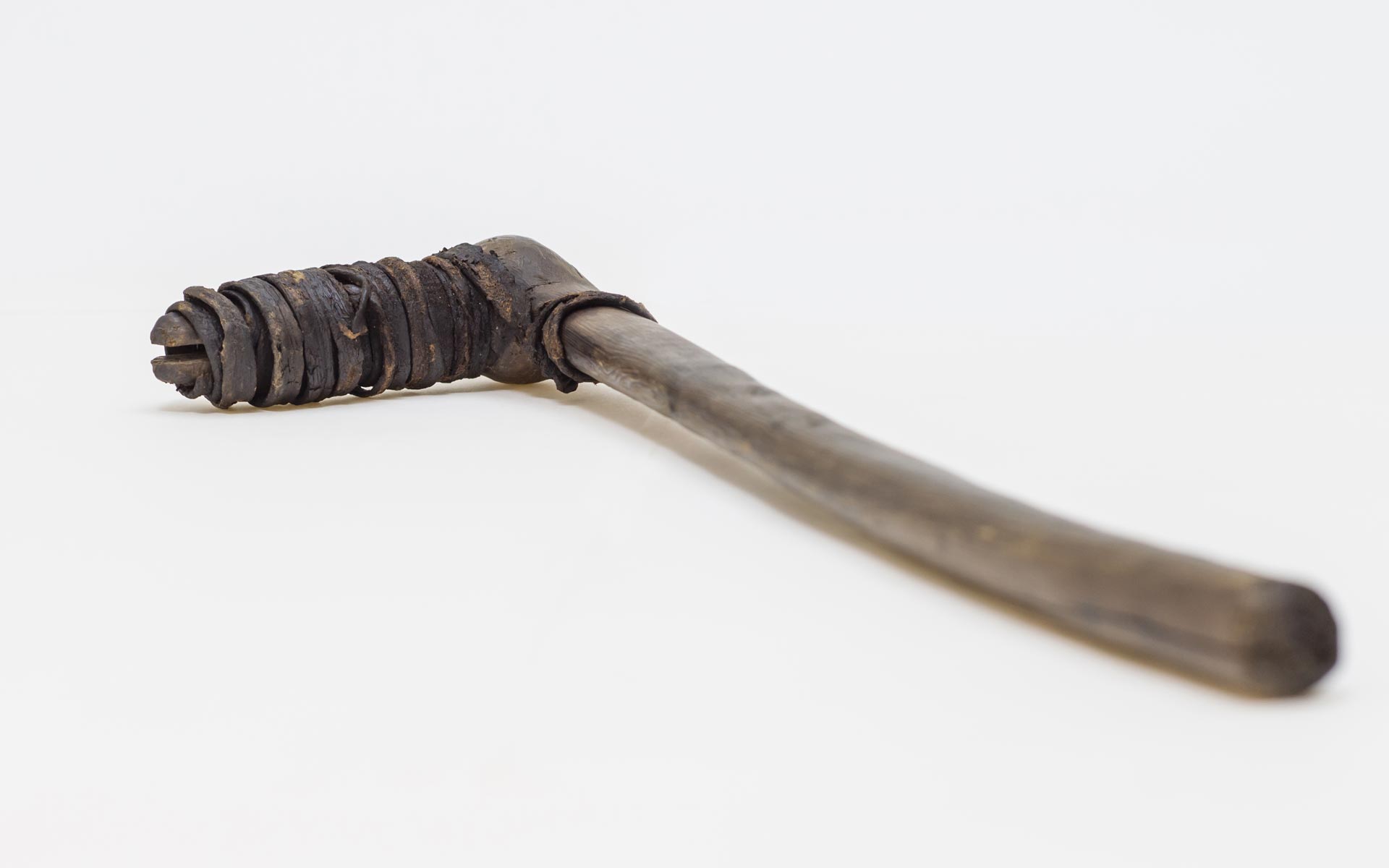 Ötzi’s axe is the only one
of its kind in the world.

The blade and haft are in excellent condition and provide detailed information on how an axe in the Copper Age was made. 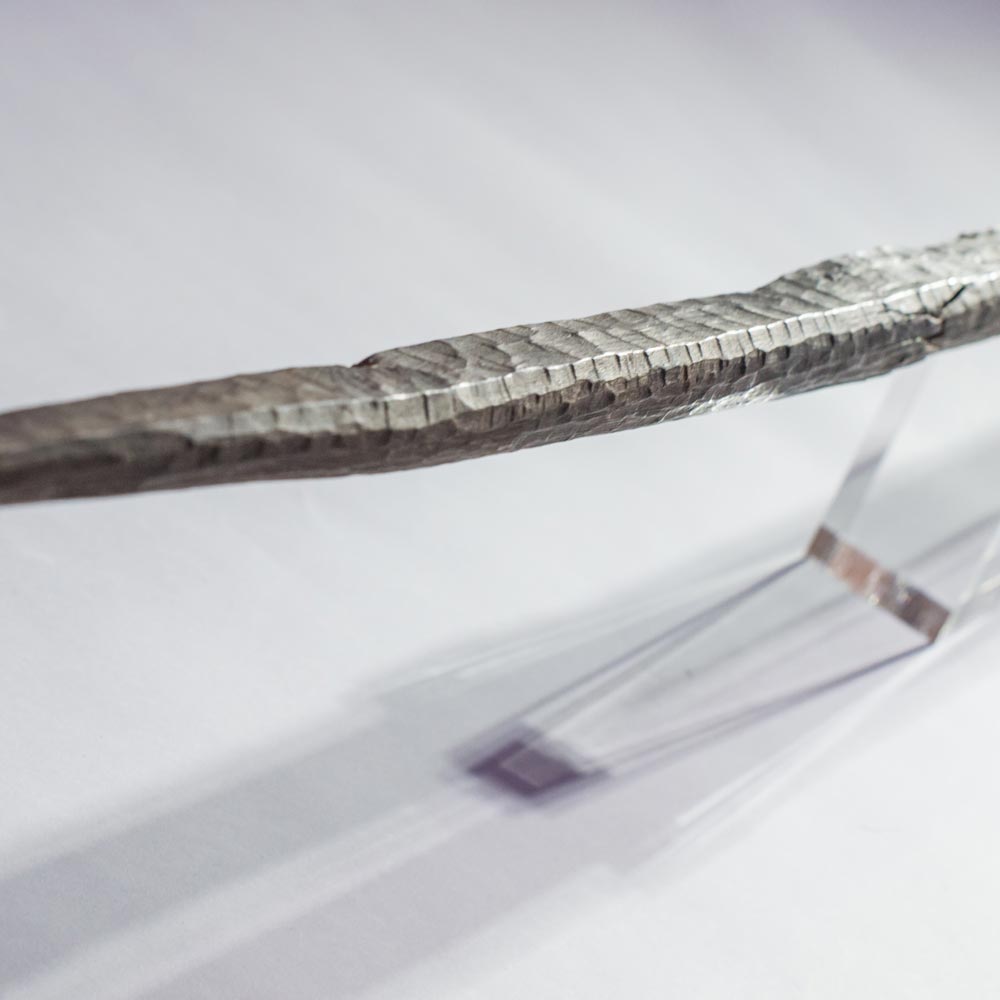 Ötzi carried a 1.82 m-long stave made from yew, which showed clear signs of workmanship. Ötzi was gradually transforming this stave into a new bow with his axe. The blank was almost finished. He just had to rub it down and polish it and add the bowstring. It’s unclear why Ötzi needed a new bow. Perhaps his old bow broke or was stolen. Experiments with a model of the bow have shown that animals or people can easily be killed from 30 to 50 metres away. 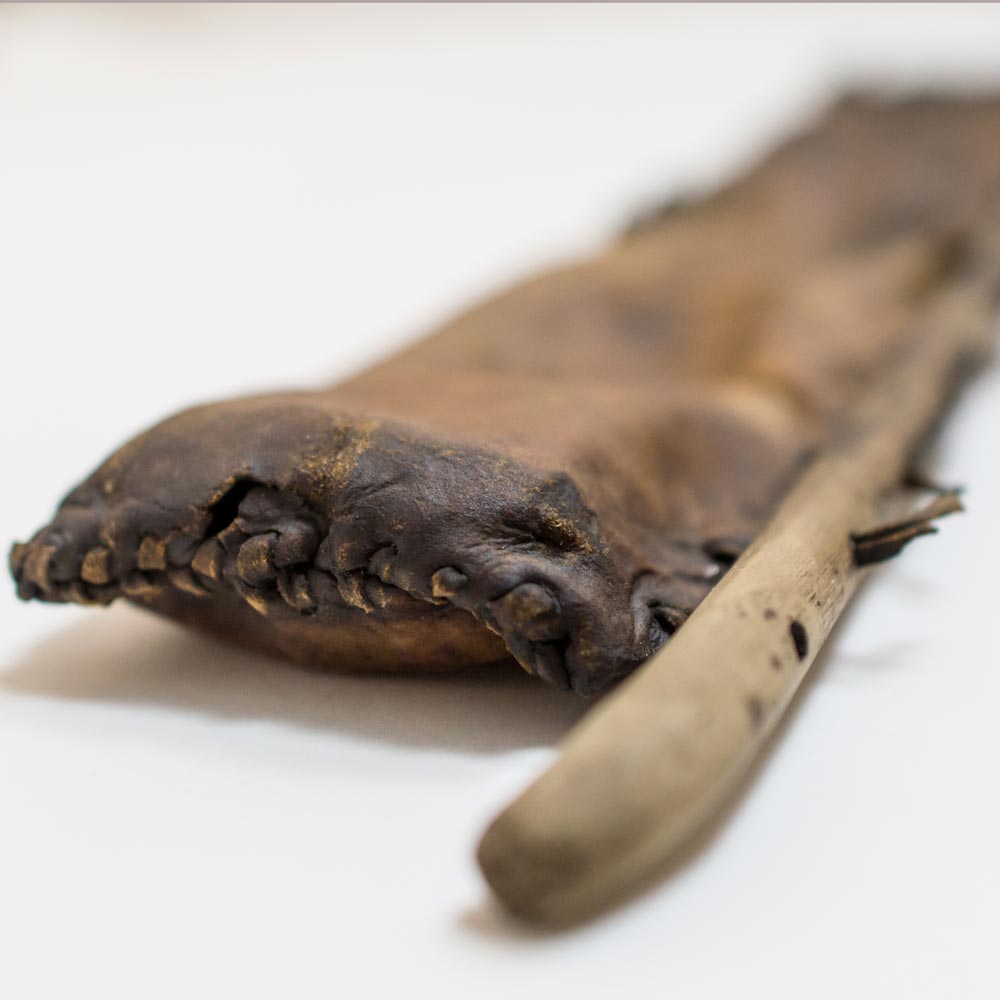 The quiver and its contents


Ötzi carried a quiver made from deer hide for his arrows. A hazel rod supported the long, narrow quiver, to make it easier to carry on his shoulder. The shoulder strap is missing. The quiver would have had a lid on top with leather strips to close it. The quiver contained 12 arrow shafts and 2 finished arrows. The arrows were made from branches of the wayfaring tree, viburnum lantana, and cornelian cherry. The bark was first stripped off and the shafts were then smoothed. A notch for an arrowhead was carved into one end. Two arrows have flint arrowheads fixed to the shaft and bound with plant fibres. At the other end of the arrow are remains of the fletching. These stabilised the arrow in flight. The fletching was also affixed with birch tar and plant fibres. Other objects in the quiver included four deer antler tips – perhaps for skinning animals – and a 2-metre-long piece of string made from tree bast.

Ötzi had an unfinished bow with him and several arrows in his quiver.

The yew bow and most of the arrows in the quiver were unfinished. 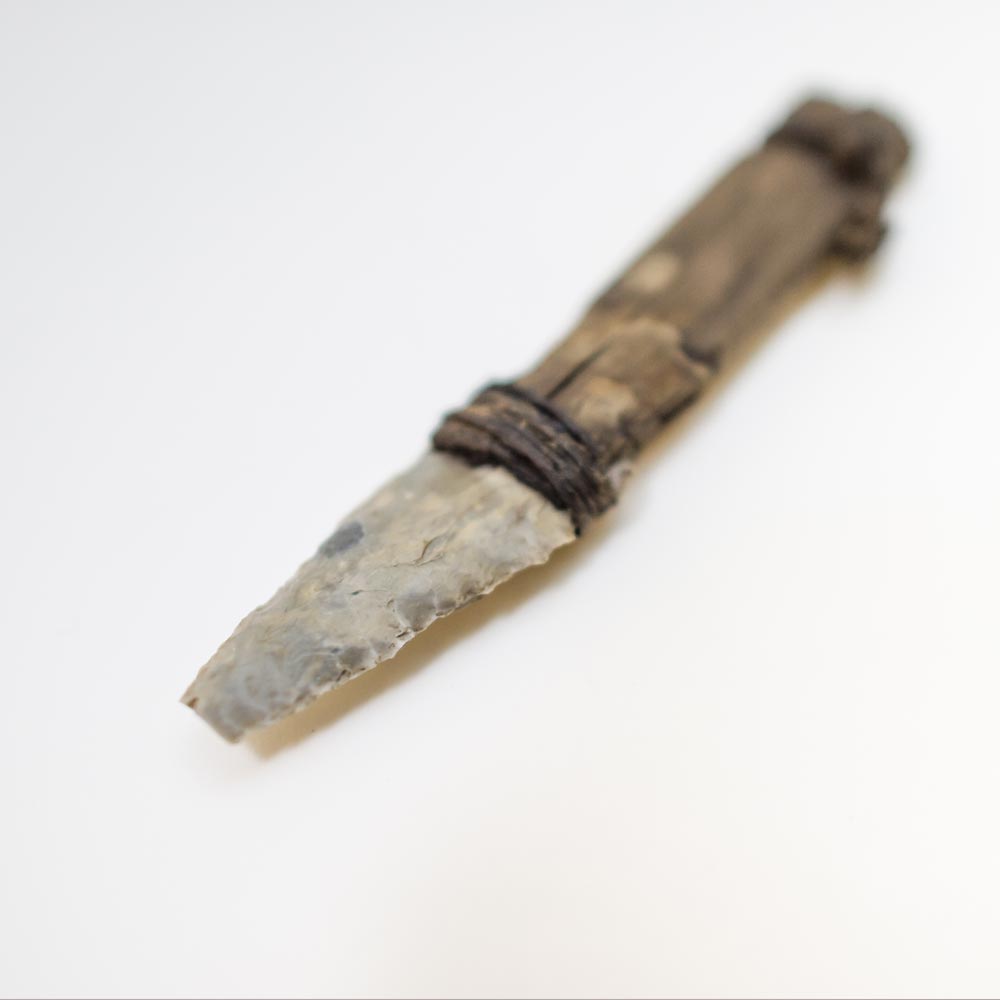 Ötzi owned a functional dagger. The dagger has a flint blade and an ash wood handle. Ötzi’s dagger is the only fully preserved dagger from the Copper Age.

Ötzi’s 13 cm dagger has a flint blade and an ash wood handle. The blade was forced into the wooden handle and bound with animal sinew. A string was attached to the end of the handle. The 12 cm sheath is made from lime tree bast. On the side of the sheath is a leather eyelet, presumably used to attach the dagger to the belt. The sheath is considerably larger than the dagger blade which is very small, hardly bigger than an arrowhead, perhaps because it was often resharpened. To sharpen his flint tools, Ötzi used a retoucheur to remove tiny fragments. Tests have shown that the flint came from Trentino (Italy).

Ötzi’s retoucheur, the only one of its kind in the world. Ötzi carried a special tool to sharpen flint blades.

Researchers were initially puzzled by an object in Ötzi’s equipment – a 12-cm-long tool made from the stripped branch of a lime tree and sharpened like a pencil. A black “lead” protrudes from the sharpened end. This was identified as a fragment from a fire-hardened antler that was hammered into the core of the branch. Archaeologic experiments have shown that this tool was used to shape (“retouch”) flint tools. First a lump of flint was hammered into the desired shape then the retoucheur was used for the precision work of fashioning a sharp blade. It was also used to re-sharpen tools and weapons. The antler point was sharpened like a pencil when it became blunt. This tool was completely unknown before Ötzi was found and has given archaeologists an entirely new understanding of the Copper Age tools and methods. 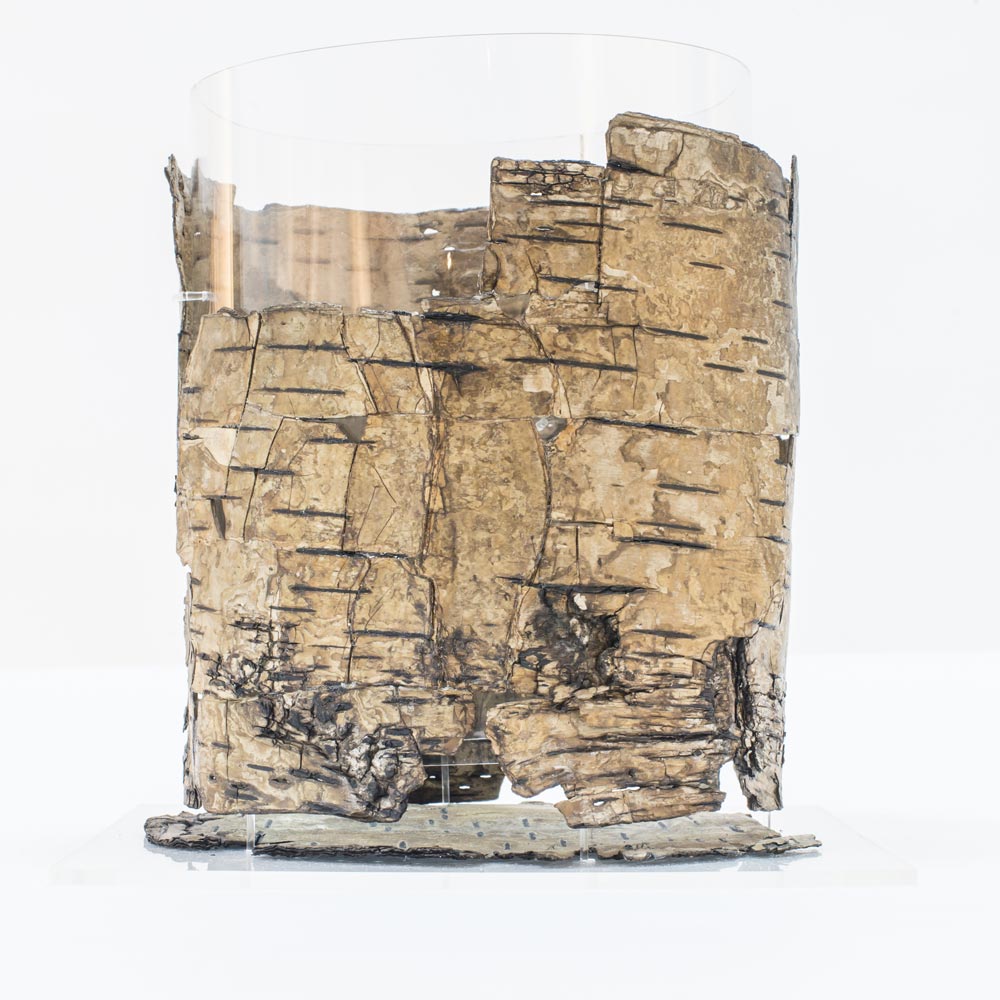 Two birch-bark containers – cylindrical pots measuring 15 to 18 cm in diameter and approx. 20 cm high – were found near the mummy. They were made from a single piece of bark and stitched together with lime tree bast. The round piece of birch bark, which served as the base, was also stitched on. The interior of one of the vessels was blackened and contained freshly picked Norway maple leaves and charcoal fragments. It is assumed that Ötzi wrapped charcoal embers in the leaves and carried them in the birch-bark container. In this way, the embers could be kept for several hours and fanned into fire in a few seconds. Birch-bark containers are extremely light and robust. They are still made today in some parts of the world, for example in nearby Trentino, where knowledge of how to make them has survived as a traditional local craft.

Ötzi and his birch-bark containers.

Two birch-bark containers were found near the mummy. They were probably used to transport charcoal. 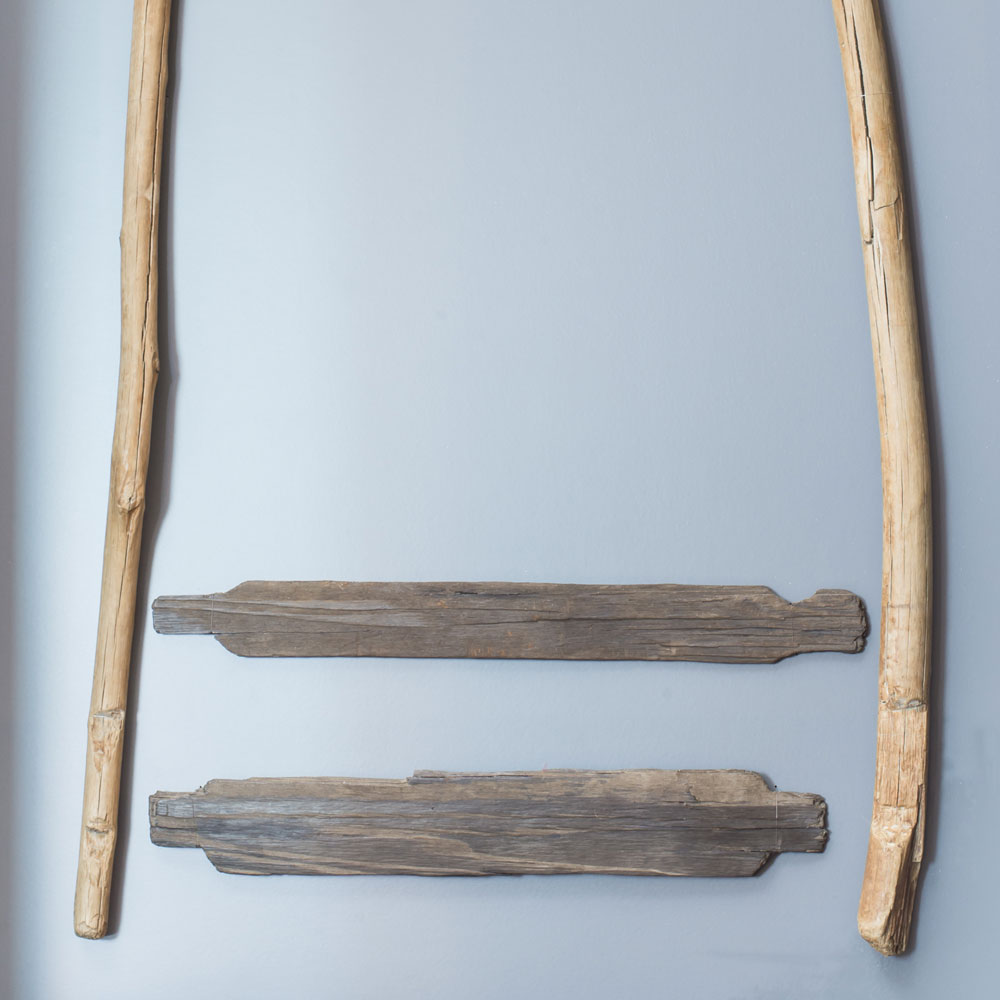 A U-shaped hazel rod (approx. 2 m long) and two narrow wooden boards (38-40 cm long) are the only surviving parts of Ötzi’s backpack. The wooden boards and the hazel rod were probably tied together with string, and a hide sack or net was attached to the frame. Backpacks made of wood have a long tradition in the Alps. They were used to transport firewood, for instance. 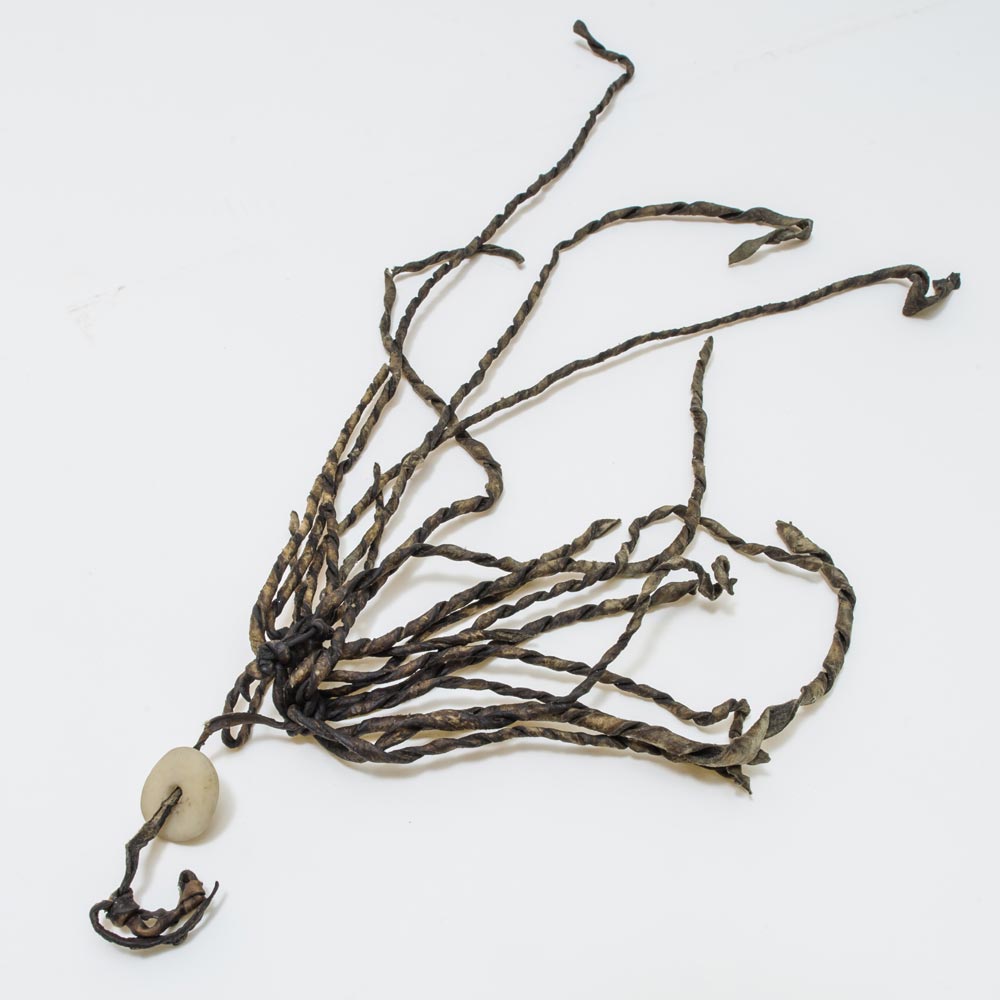 A stone disc made of Dolomite marble has a hole in the middle through which a tassel of narrow twisted hide strips is threaded. What at first glance resembled a talisman has today been identified as a bird belt. In bird hunting, birds that have been killed are hung by the head from a loop on a belt. The hunting tool could have been attached to the belt with the aid of the stone disc. 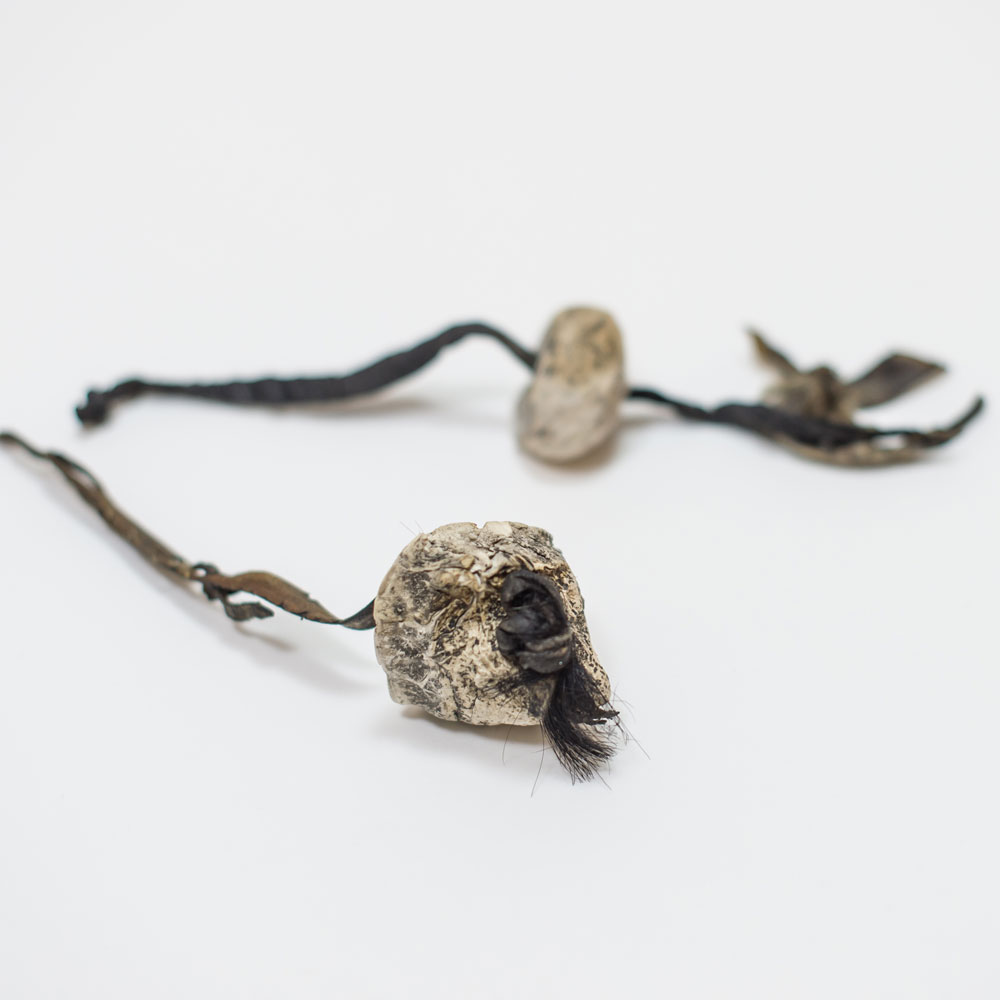 Also part of Ötzi’s equipment were two pieces of birch polypore (birch fungus), which were threaded onto hide strips. It is assumed that the fungus had therapeutic purposes, since it was used medicinally as recently as the 20th century. The fungus is said to have antibiotic and styptic properties.

Ötzi wore a tassel with a stone disc attached as well as pieces of birch fungus, which was probably used for therapeutic purposes.